Raahgiri Day at Dwarka saw many show up in large numbers
due to the favourable weather early on Sunday morning. However, the sudden downpour put an end to the day's activities. To celebrate World Yoga Day, Yog Youngistan held a session which had participants from all age groups. Vikram Mundra from the organisation told us, “Dwarka has great energy , it's infectious. There are so many people here celebrating Yoga Day with us.“ This was followed by a bhangra and aerobics workout by Bhangrabrics. Despite the showers, the Raahgirs con Despite the showers, the Raahgirs continued to roam the streets of Dwarka. While some indulged in impromptu rain dances, others were seen performing stunts. Shweta Shaluja, a homemaker, said, “The best part about Raahgiri is the community feeling. We all get together to workout, dance and enjoy . And when it rains, we get to gether to enjoy that too.“ Other than World Yoga Day , Sunday was also Father's Day and many were celebrating that as well. Rajat Mukherjee, an entrepreneur, said, “My six-yearold daughter loves dancing at Raahgiri, so she got me here today to dance and play with her for Father's Day . There isn't a better way to spend Sunday, in my opinion.“ 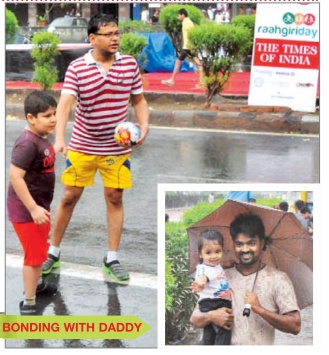 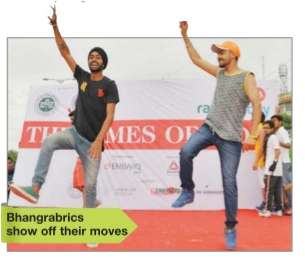