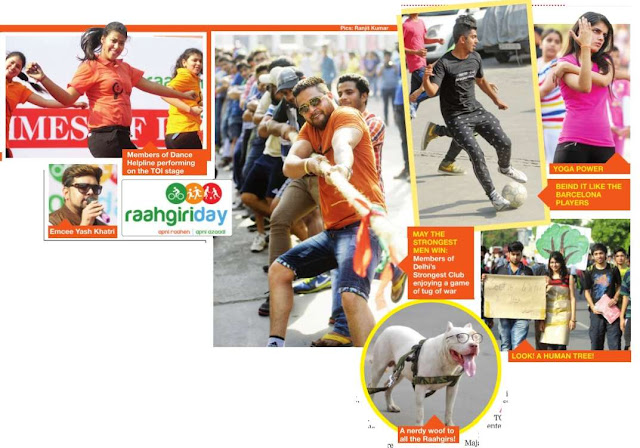 CELEBRATING BARCA'S WIN: Most of the football fanatics watched Barcelona become
European champions for the fifth time after beating Juventus 3-1 in Berlin, till early morning, before they turned up at Raahgiri Day in CP , organised by Delhi Police and New Delhi Municipal Council (NDMC) along with Embarq India and supported by the Times of India. Kudos to their enthusiasm! Die-hard Barcelona fans were seen cele brating the victory by showing their own football skills at the inner circle at Raahgiri. “Barcelona were skills at the inner circle at Raahgiri. “Barcelona were the favourites and they certainly played like champions. The MSN ­ Messi, Suarez and Neymar ­ trio has delighted us with its game throughout the competition and we are trying to develop skills like them,“ said Praveen Sharma, a college student.

NOW , IT'S FRENCH OPEN: With the UEFA championship Let ague over, the sports enthusiasts said that they were now looki ng forward to the French Open Men's Finals on Sunday evening, where Novak Djokovic will be hoping to beat Stan Wawrinka. “I love Djoker.
He is not just an amazing player but he is funny too. I'll be rooting for him,“ said Priyanka, a school student.
AEROBICS WAALA BHANGRA: The TOI stage was once again proved a hub of entertaining activities. A body combat train ing session with the martial arts group Kali Majapahit India saw Raahgirs learning a few self defence tricks. City-based band Turkush enthralled everyone with their tracks like Dooba Dooba Rehta Hoon, Kya Hua Tera Wada and Kaise Bataye. While the pretty girls of Dance Helpline organized a flash mob, making the crowd dance with them, a group of Punjabi boys, the Bhangrabics, amalgamated